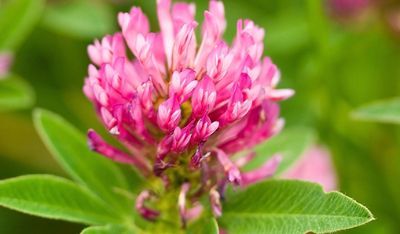 In my last post, I discussed the benefits of phytoestrogens, and how these plant compounds may help to regulate the effects of estrogen. While soy foods are perhaps the best-known phytoestrogens, there are a number of herbs with apparent phytoestrogenic properties that have a long history of use in herbal medicine. Current research has demonstrated the usefulness of these botanicals in protecting breast and prostate health.

The following herbs are among those that I use extensively in my practice:

Often used as an alterative in herbal medicine, red clover historically was used to improve cellular nutrition and lymphatic drainage, and is often found in many traditional herbal formulations for cancer.

Red clover flowers were a key ingredient of a famous Eclectic medical formulation called “Trifolium Compound.” The ingredients included fresh extracts of Trifolium pratense, Stillingia sylvatica, Lappa minor, Phytolacca decandra, Cascara amarga, Berberis aquifolium, Podophyllum peltatum, Xanthoxylum carolinianum and potassium iodide. It was intended for administration “in syphilis, scrofula, chronic rheumatism, glandular and various skin affections.”1 The popularization of red clover as a cancer treatment in the first half of the last century derived from various sources, including Jethro Kloss, and the controversial Harry Hoxsey, whose anticancer “Hoxsey Formula” incorporated most of the herbs of the original Trifolium Compound, including red clover flowers. Hoxsey formula type products persist in the retail marketplace today.2

While the traditional preparation of red clover contains only trace amounts of phytoestrogens, the standardized modern version of the plant extract contains significant amounts. Red clover blossoms contain the isoflavones formononentin and biochanin A, neither of which is found in soy. These compounds are partially metabolized in vivo to the estrogenic metabolite equol, which has protective properties.

Red clover has demonstrated tumor-suppressing ability in breast and prostate cancer models through diverse mechanisms. These include the stabilization of gene behavior (PTEN, Bcl-2/Bax), inactivation of various transduction pathways (insulin-like growth factor 1(IGF1)/IGF1R-phosphatidylinositol 3-kinase (PI3K)/protein kinase B (Akt) pathway) including inflammatory pathways such as NF-kB, and the selective suppression of cancer cell angiogenesis.

A number of studies suggest that red clover extract does not induce or promote breast cancer and appears to be protective for breast tissue:

Two hundred years ago, Native Americans used the root of the black cohosh plant to relieve menstrual cramps and symptoms of menopause, such as hot flashes, irritability, and insomnia. Today, black cohosh continues to be employed as one of the primary botanicals for easing the symptoms of PMS, dysmenorrhea, and menopausal discomfort.

Although some authors suggest that black cohosh root contains substances with selective estrogen receptor modulator (SERM) activity, this has never actually been demonstrated. In fact, recent data indicates that black cohosh may have an effect on dopaminergic and serotoninergic systems. Based on 26 articles (14 randomized controlled trials, 7 uncontrolled trials, and 5 observational studies) current evidence does not support an association between black cohosh and an increased risk of breast cancer.11,12

Multiple laboratory studies have investigated a possible link between black cohosh and breast cancer. When we look at a few of the more relevant studies, they indicate that black cohosh is safe when used in cases of breast cancer:

The flowers (or strobiles) of the hops plant have been used for centuries for brewing beer, but they have been equally valued in herbal medicine for a variety of health issues, including anxiety, insomnia, indigestion, and improving the flow of breast milk for nursing mothers. Research indicates that hops has phytoestrogenic and anticancer properties.

Hops contain 4–14% polyphenols, mainly phenolic acids, chalcones, flavonoids, catechins, and proanthocyanidins. A number of prenylflavonoids are present in hops, among which 8-prenylnaringenin and xanthohumol are often referred to as phytoestrogens. Hops has anticarcinogenic properties via a broad spectrum of inhibitory mechanisms at the initiation, promotion, and progression stage of carcinogenesis.20

Monteiro et al. (2007) studied the effect of the prenylflavonoids xanthohumol, isoxanthohumol and 8-prenylnaringenin on the breast cancer Sk-Br-3 cell line proliferation, apoptosis and activity of the enzyme aromatase. The results showed that all tested prenylflavonoids were able to inhibit aromatase activity and thus, estrogen formation. These findings add weight to the idea that hop flavonoids may have anti-breast cancer effects and shed new light on a possible mechanism of action by which these effects occur, namely through their ability to decrease estrogen synthesis.27

Licorice, a member of the pea family, is one of the oldest and most frequently employed botanicals in Chinese medicine. Licorice root is often used in small to moderate amounts to harmonize the characteristics of other plants, and to bring the formula together energetically—similar to using a common spice in creating a gourmet meal. The estrogenic activity of licorice is attributed to the compound isoliquiritigenin.28

Licorice also contains triterpenoids, glycyrrhizin, and glycyrrhizic acid, which displays more of an adrenal cortical conservation effect than an estrogenic effect.29 Licorice extract has demonstrated a stress protective effect from the overstimulation of cortisone affecting the thymus and adrenal gland.30

As is obvious from the extensive research outlined above, phytoestrogens offer a simple, safe, and effective tool for supporting health, particularly for the hormone sensitive tissues found in the breast and prostate. The diverse ways in which these compounds act to protect and enhance health is precisely the reason that I rely on botanicals and natural foods to provide the body with what it needs for optimal wellbeing.